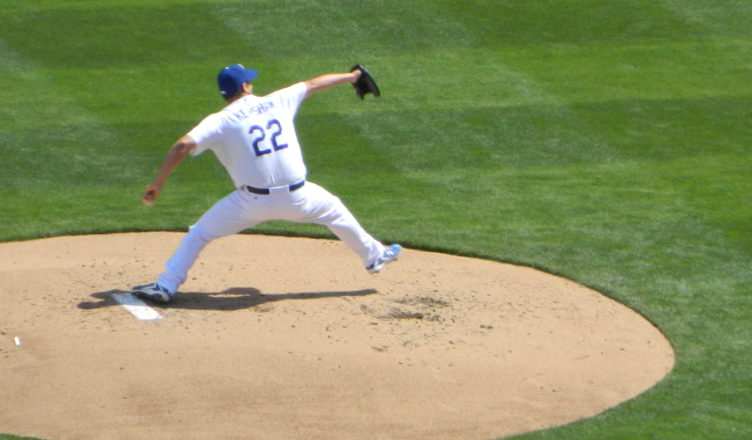 As (recent) Dodger folklore goes, no matter what’s ailing the team, Clayton Kershaw will make everything alright again. Well, the Dodgers have lately been ailing, banged up, not hitting, and losing games they should have won. Enter the savior GOAT.

The trouble was, nobody told the Rockies the mere presence of Mr. Kershaw was enough to notch a win. Tonight the Rockies came out of the box swinging – and making quality contact. The bases were loaded with no outs before the seats were warm, and it took some sneaky-good pitching, the arm of Yasiel Puig, and help from an expanded strike zone to get the Dodgers out of that first inning jam with just one run scored against them.

In the top of the second, Scott Van Slyke shook some of the rust off his 2017 start with a short-stroked ball that caught some air and sailed over the wall to tie the game at one run apiece.

Then Corey Seager singled in Kershaw.

It was 3-1 with men again on the corners, and still nobody out. Adrian Gonzalez knocked in another run with a FC, and the inning ended with the good guys up 4-1.

The savior was bit by the Rockies in the sixth, when he gave up a quick run on a couple of hits. He left after seven innings, up 4-2.

With two on and two out in the eighth, Kenley Jansen got the call for the four out save. He got the final out of the inning, and Los Angeles held its breath as he faced down the Rockies in the ninth.

The Dodgers win 4-2, and the legend of the savior goat grows.

The boys split the series with the Rocks, just as they did with the snakes, for a .500 homestand, and a solid third place in the NL West. They are now sitting on a .500 record for the season.

Brett Eibner, acquired this past winter from Oakland, made his Dodger debut, and he played like I would imagine I might in my Dodger debut – 0 for two with two strike outs, and getting beat by a ball hit right at him in center field.

Home Run: Scott Van Slugger (His first of the season)

49 thoughts on “Dodgers Win! (but Continue to Swirl in Third Place)”