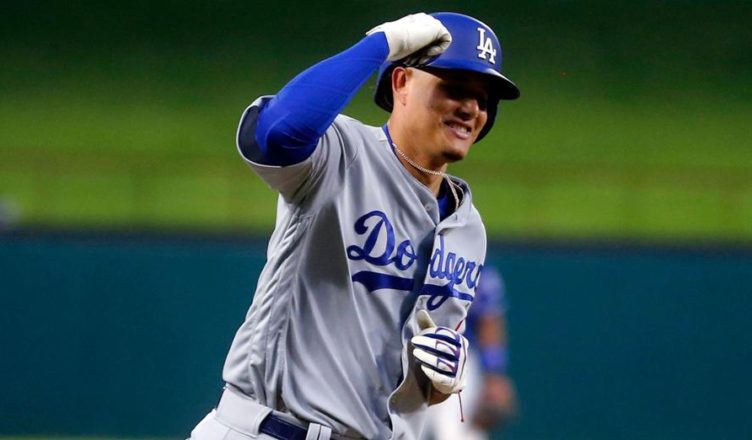 The Dodgers put their modest four-game winning streak on the line tonight, sending Alex Wood, who skipped a start after a bad game against the Cardinals, to the mound in the final of a two-game series against the Texas Rangers.
Cody Bellinger cracked the scoring seal with a powerful home run (21) to center field in the third inning. Manny Machado (32) then took the first pitch of the fourth and sent that one beyond the CF fence.
In the meantime, Wood knocked the Rangers down, with excellent location and movement on his fastball and breaking pitches. He ended the night with seven scoreless innings, five Ks, and two walks.
Yasiel Puig shook things up in the seventh with a 2 out triple, punctuated by one of his patented, tongue wagging, headfirst slides into third. Full disclosure, he came up a bit short and bounced his face into the dirt about a foot short of the bag. Luckily, he pulled his tongue in before he crash-landed. Puig then attempted to steal of home, but was thrown out at the plate. Giving credit where due, it wasn’t a bad play. The third baseman was far off the line and the left-handed pitcher was completely ignoring Puig. It was going to take a perfectly executed play to get him, and the Rangers pulled it off.
No problem, as Yasmani Grandal continued the solo home run parade in the eighth, with a blast from the right side of the plate (21) to put the Dodgers up 3-0.
Scott Alexander took over for Wood with a one, two, three eighth inning. With Kenley Jansen sitting in the dugout, Kenta Maeda took the mound in the ninth.
With one out and a walked batter on first, Adrian Beltre hit a double to centerfield to break up the shut out, and get the Rangers on the board 3-1.
After a long battle, Maeda got a pop up and walked the next batter on four pitches. Then he got the next batter to ground out to Cody Bellinger on the first pitch he saw to end the game and preserve the save and the sweep.
Up next: The Dodgers open a weekend series against the Arizona Diamondbacks in a fight for the in L West lead. Now things get really interesting.