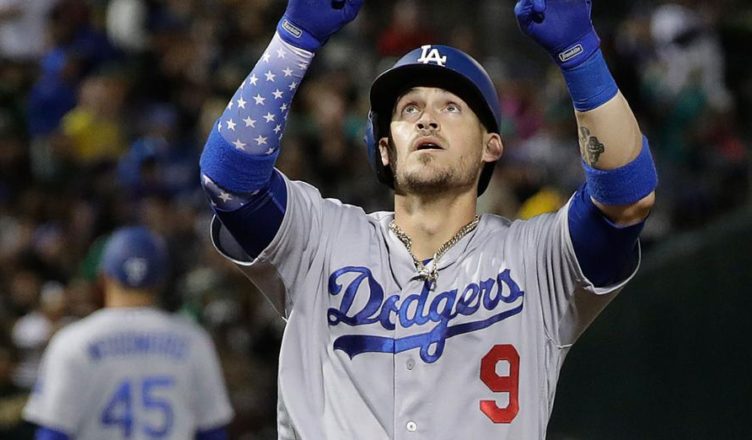 Every major league pitcher has an Achilles Heel stadium. For Clayton Kershaw, it’s Oakland-Alameda Stadium, where the Oakland Athletics play.Believe it or not, Kershaw came into tonight’s game without ever having won there. With a struggling Dodgers offense ( which has never got a hit off Oakland starter Mike Fiers) behind him, the odds weren’t promising that Kershaw would break his losing streak, no matter how well he pitched.
Fiers started out like he was on fire, Sitting the first dozen batters he faced, while striking out eight.
The A’s got to Kershaw in the fourth, scoring two runs on four singles. He was gon after six, giving up 2 runs, 6 hits, and striking out just one. Another no decision in Oakland, so he’ll have to seek victory number 150 against the Giants.
Then the Dodgers came right back in the fifth with a solo home run by Yasmani Grandal to cut the A’s lead in half. The Dodgers picked up another couple of singles from Cody Bellinger and Max Muncy, but they were left on the bases. The big news however, was Fiers was now vulnerable.
Chris Taylor made up for killing the rally in the fifth inning by picking up a game-tying RBI in the seventh when he drove home Cody Bellinger with a single.
Oakland took the lead in the eighth on a two on-one out grounder to third that produced a play at the plate. Justin Turner’s throw was there, and Yasmani Grandal applied the tag, but he never had the ball in his mitt. The ball sat on the dirt in front of home plate and the go-ahead run scored. Oakland led 3-2.
The Dodgers last chance resided in Cody Bellinger, Yasiel Puig and Max Muncy. Puig walked and that was it. The Dodgers couldn’t muster two hits in row (like so often) and they lost (like so often).
Next stop: Colorado