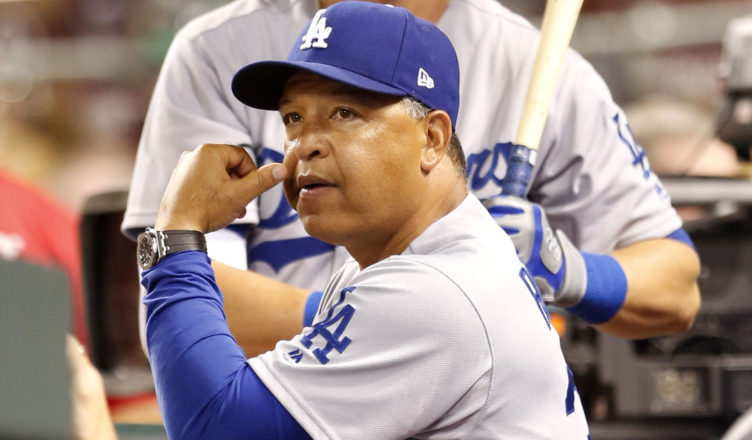 Just one week after falling behind the Arizona Diamondbacks by 4 ½ games in the National League West, all is right in Dodgerland once again. Kenley Jansen has had three straight scoreless appearances, collecting two saves, and a win. Walker Buehler looks like the ace of the future, or maybe even the present. Matt Kemp has returned from his second half swoon to save the Dodgers in consecutive days, propelling them to a ½ game lead over the Rockies in the West. There were two decisions Dave Roberts had this week that really stuck out. Let’s take a look.

With the bases empty, two out, and the pitcher’s spot due up, Dave Roberts had a decision to make. Hyun-Jin Ryu was through seven innings, allowing only two hits since the 1st inning, while retiring the last 10 batters he faced. He had only thrown 86 pitches to this point, well within the framework to go back out there for the 8th inning to keep the game within reach. However, with the Dodgers trailing it seemed like the obvious choice was to pinch-hit for Ryu for a shot at a two-out rally. Not so fast…

When you look at the numbers it’s not as obvious of a decision as it may seem. By sending up a pinch-hitter for Ryu, who is a lifetime .176 hitter, Roberts would be refusing to essentially concede the inning to the Diamondbacks. But what equity is he gaining exactly? The run expectancy of a bases empty, 2 outs situation is just .095, and the probability of scoring a run is only about 6%. Let’s assume that if Ryu hits, the probability of scoring a run in the inning is 0%, which it is not, Roberts is only giving the Dodgers a 1 in 20 shot at scoring at least one run. Is this worth taking out your starting pitcher who has essentially dominated a lineup for the last six innings? Well, contrary to what he has chosen to do in similar situations all season, he thought so.

What Happened: Kike Hernandez pinch-hit for Ryu, and homered to tie the game. Dodgers won 3-2.

After the Dodgers failed to score in the bottom of the 8th with Kenley Jansen warming up in the bullpen, the Diamondbacks were due to send up left-handed hitting Daniel Descalso, switch-hitter Ketel Marte, and left-handed Alex Avila. Caleb Ferguson pitched a dicey 8th inning, allowing a leadoff walk and a hit, before striking out Escobar to end the inning. Ferguson’s spot in the order did not come up in the bottom half of the 8th, so he was still able to start the 9th inning if that’s what Roberts chose to do. The standard play in this situation is to bring in the closer Jansen in a tie game in the 9th inning at home to give your offense the best chance to win it in the bottom half. Does Roberts leave Ferguson in for the 9th or go to Jansen?

The Case for/against Caleb Ferguson: Caleb is a lefty, so Roberts can at least start the inning playing the matchup with left-handed Descalso leading off. However, Ferguson isn’t exactly a matchup guy. He appears to be as effective against righties as he is against lefties, with almost identical OPS marks of .665 vs .660. Also, Descalso is hitting 34 points higher against lefties than righties this year, and with more power. Not to mention he’s 1-12 with 7 strikeouts against Kenley Jansen in his career. The next batter, switch-hitting Ketel Marte hits 97 points higher from the right side against lefties with more extra base hits in almost half as many plate appearances.

Clearly, it would seem that Jansen is the no-brainer choice for Roberts to go to here. The only reason Ferguson could be used to start this 9th inning is workload, perhaps. Jansen is only a little over a week from returning from the DL, and has only recently started to look like himself. This would be his third day of work in a row, and it’s possible Roberts would want to steal an out with the lefty/lefty matchup to limit Kenley’s pitches in this appearance, otherwise, there’s no clear advantage to not having the closer start and finish the inning.

The Dodgers were absolutely rolling into September last season when they entered Players Weekend, and subsequently lost 16 of 17 games. This year, they were at their lowest point of the season after getting swept by the Cardinals and falling 4 ½ games out of first place when Players Weekend arrived. It seemed to have come at the perfect time to change the mood in the clubhouse, as they swept the Padres, and have rolled off 8 wins in their last 9 games to retake first place. Maybe it was Players weekend, maybe it was the Padres coming into town, or maybe it was Clayton Kershaw’s Ping Pong tournament that turned it all around, but no matter what it was, it came at the right time setting up the city for one fun month.