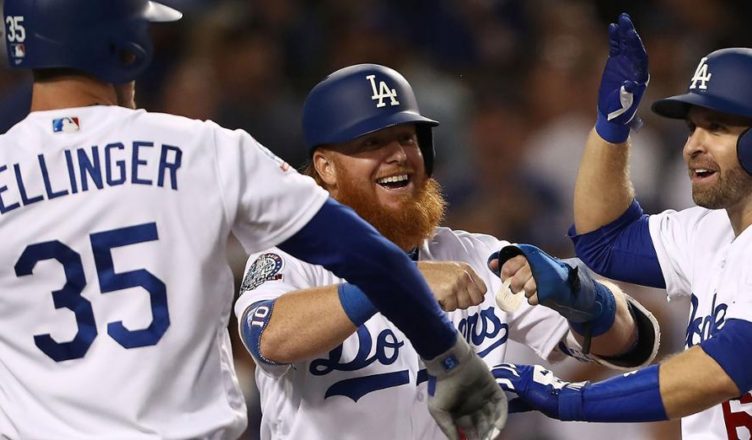 The Dodgers, newly restored in first place after beating the Brewers in extra innings last night, returned to battle Milwaukee again, and this time with a recently rejuvenated Clayton Kershaw on the mound.
After a lethargic past few days, the Dodgers offense roared back to life tonight, starting things off with a Joc Pederson home run in the first inning. Manny Machado go the boys on the board again in the second with a single, a stolen base, and a dash home on a Milwaukee error.
The big Dodgers fireworks came in the third inning, when Cody Bellinger bounced a long fly ball off the RF foul pole for a grand slam. Then Yasiel Puig took the first pitch of the seventh and blasted it into the Dodgers’ bullpen, putting the boys ahead 7-1.
Meanwhile, Kershaw was cruising, despite giving up a first inning run. In the fifth, he gave up a solo HR to Christian Yelich.
Turned out that was just a gnat on the Dodgers’ shoulder, as Brian Dozier blasted a three-run HR in the bottom of the fifth (his second home run in as many nights). The boys were up 10-2 with half a game to go.
Justin Turner, fresh off the disabled list, got in on the action as well. He went deep to centerfield for a solo homerun of his own in the sixth. That put the Dodgers up 11-2, and gave them a home run cycle, with a solo, two and three-run home runs, and a grand slam.
Kershaw was done after 98 pitches and six innt. Eric Goeddel came in for the seventh. With two out, he gave up a couple of singles and a three run home run, to bring the Brewers closer at 12-7.
Just another gnat. After a couple of doubles by Max Muncy and YasielPuig scored a run, Joc Pederson hit his second home run of the night – this one good for three more runs. The Dodgers were up 16-5 and the Brewers went to a position player pitcher.
Perez came in with his 70 mph and the Brewers really fell apart. Errors and mispays in the outfield led to a couple more runs. Yasiel Puig mashed his second home run of the night, and when the inning was over, the Dodgers had scored nine runs and were up 21-5.
Pedro Baez mopped up in the ninth, and the Dodgers sent the Brewers off to Colorado as the answer to the trivia question: “Who were the opponents when the Dodgers set a Dodger Stadium record of 21 runs scored?” (18 hits and 7 home runs.)
Next up: The Astros. The laughing will now stop. Game faces on.