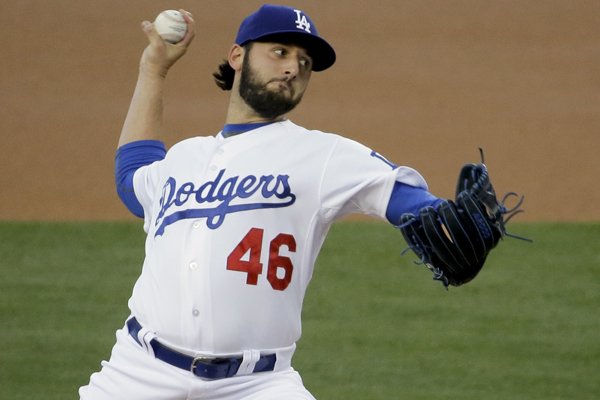 When the Dodgers acquired him in 2014 nobody thought much of it. His only season in the majors didn’t see him have much success. He appeared in 10 games and made 9 starts posting a 1-6 record and a 5.50 ERA. Although his 4.01 FIP indicated he pitched better than standard metrics indicated. He struck out 48 and walked 17 in his 52.1 innings pitched that season. The Dbacks gave up on him.

The Dbacks loss was the Dodgers gain. With Hrun-jin Ryu sidelined with a shoulder injury and Brandon McCarthy predictably suffering another catastrophic injury, the Dodger’s backend of the rotation was being held together with string and duct tape. The Dodgers needed a reliable arm. They called upon Bolsinger in May and he gave them needed stability.

On April 23rd Bolsinger made his first start for the Dodgers against the Giants in San Francisco. It was a tough assignment for a pitcher making his debut with a new club. Bolsinger responded very well. He allowed just one earned run on five hits across 5.2 innings while striking out five. He walked two and was not involved in the decision. Unfortunately the Dodgers lost that game, but it was not because of Bolsinger. He gave the Dodgers a good chance of winning.

While Bolsinger’s fastball has never been spectacular, it’s normally clocked anywhere from 87-89 mph. Bolsinger relies heavily on off-speed offerings and mixing pitches. Deception is key for him. He uses a big 12-6 curveball that generally registers at 77-84 mph. He also mixes in a cutter and slider that helps him get ground balls. Overall Bolsinger turned in a solid campaign for the Dodgers in 2015. He posted a 6-6 record with a 3.62 ERA/3.91 FIP with 8.6 hits per nine and 8.1 K/9 rates. He made 21 starts and struck out 98 in 109.1 innings of work. He walked 45 and allowed 11 home runs. He turned in above average production while making spot starts most of the season.

His best start of the year came on May 23rd at Dodger Stadium against the Padres. On that evening Bolsinger allowed just one hit across eight innings of shutout ball. He whiffed eight batters and didn’t walk anyone. The one hit he allowed was the only base runner of the game for San Diego.

He did have some issues. It seemed as though he ran into trouble the third time through opposing batting orders. Left handers hit .287 against him and he seemed to run out of gas towards the end of the season. Bolsinger posted a 7.00 ERA in the month of September. The Dodgers removed him from the rotation in favor of Alex Wood. Bolsinger did return to the rotation in September but as mentioned above didn’t pitch well.

Health, reliability, and common sense go a long way when building a pitching staff. Bolsinger gave the Dodgers a lot of consistency when they desperately needed it. Bolsinger is back with the Dodgers again this spring, fighting for a spot in the major league rotation. It’s unlikely he’ll get one with the new additions of Scott Kazmir and Japanese import Kenta Maeda. Brett Anderson, Alex Wood, and Hyun-jin Ryu are also blocking him. However he’s a very useful guy to have around in case of injury. We know that guys are going to eventually get hurt throughout the season. Having a pitcher like Bolsinger around enhances the depth that so many people talk about when mentioning the Dodgers. I hope Bolsinger gets another chance to prove himself because if history tells us anything, we’re probably going to need him.