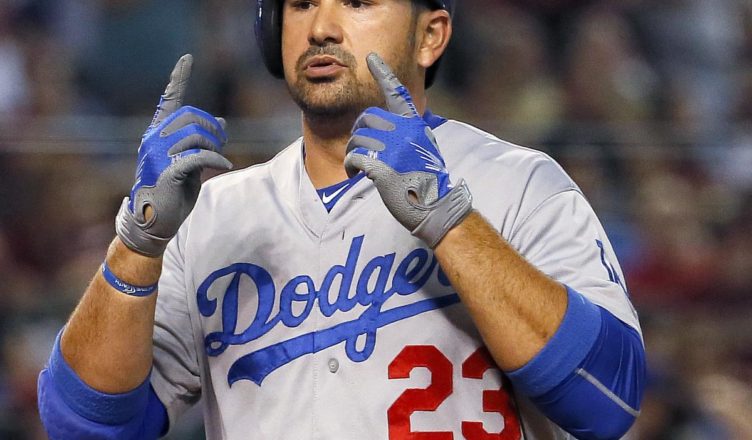 The Dodgers flipped veteran Adrian Gonzalez to the Atlanta Braves alongside pitchers Brandon McCarthy, Scott Kazmir and infielder Charlie Culberson in exchange for former Dodger Matt Kemp in one of the most shocking steamy salary dumps in recent memory. While Gonzo is no longer with the Dodgers his accomplishments and leadership on and off the field will never be forgotten. We may see Gonzalez with another club in 2018 but he will always be a Dodger in our hearts. So LADR will be remembering the life and times of Adrian Gonzalez’s memorable Dodger career. We’ll take a look back at some of his greatest achievements in Dodger blue. Oh Gonzo, how we loved you.

Today’s Gonzo moment takes us back to April of 2015. During this season Gonzo began the season on a tear like we had never seen before. The Dodgers opened the season with a three game set against the San Diego Padres at Dodger Stadium. Gonzalez had a very good night in the third game of the series when he smashed three home runs.

All three of his home runs were solo shots. All three of them were hit off Andrew Cashner. Gonzo homered in the first, third, and fifth innings. He ended the game going 4 for 4 with 3 home runs and 4 runs batted in. Gonzo also hit two additional home runs in the first two games of the series. All total Gonzo swatted five home runs in the first three games of the season. Gonzalez would go onto to tally 28 home runs and 90 runs batted in that year. He posted an .830 OPS and reached base at a .350 clip during the 2015 regular season. Gonzalez would add another three home run performance a year later in an 18-9 Dodger win over Cincinnati. Gonzo’s eight runs driven in prompted him to exclaim how much he loved great American Ballpark as he walked back to the dugout.