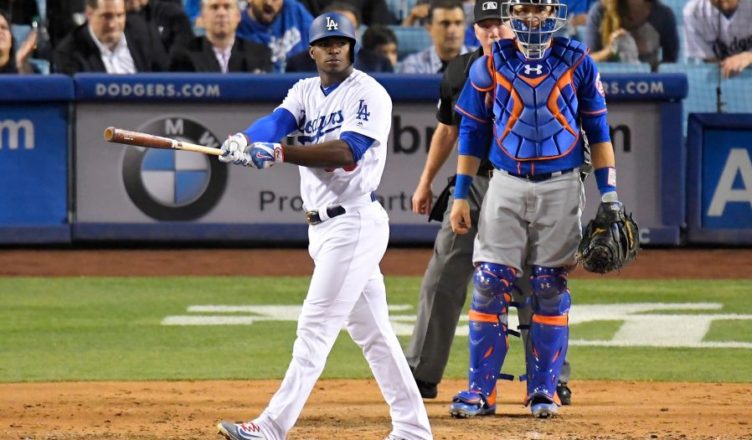 The rhubarb with the Mets began in the second of this four-game series when the Mets’ starting pitcher Robert “Maybe if I have long hair, batters will think I’m Syndergaard” Gsellman threw high and hard at Puig’s head. This wasn’t the first time an opponent has chosen Yasiel to be the target of chin music.  Whether he’s hitting well or not, for some reason, other teams choose to send their intimidation messages right at Puig. They don’t throw at the meaty parts of his hips, no sir. They throw right at his head, and that’s just what Gsellman did.

The tactic didn’t scare Yasiel away, as he’s had an impressive series.  That night he hit a single, a double, and he scored twice. Last night, after the Mets walked Joc Pederson to bring Puig up, he hit a three-run home run that broke the game open and crushed the Mets’ hopes.

As Puig rounded the bags (after admiring his smash), Mets first baseman Wilmer Flores told Puig to run faster. Yasiel turned to Flores and vocally answered him the way he silently replied to some hecklers in Milwaukee a few days ago. The catcher and Puig also exchanged pleasantries when he crossed the plate. Puig’s leisurely stroll around the bases took 32.1 seconds. It came in as the second-longest home run trot of the season so far.

That wasn’t the end of it. Between innings Yoenis Cespedes and Jose Reyes had a discussion with Puig as the teams switched sides. After the game Flores had this to say: “I don’t think [Puig] knows what having respect for the game is. We’re playing horribly right now. We don’t need his s—.”

Puig is red-hot. Over the past seven days he’s got 7 hits, 7 RBIs, scored 6 times, and blasted three home runs. The Mets would like nothing better than to shut Puig down, and I’m betting they’d love to do it with a fastball in the ribs – or worse yet – to the face.

The Dodgers have to know this is a real possibility – and the Mets are just bitter enough to do it. Yasiel Puig is becoming one of the best mashers on the team, and he’s by far the best defensive right fielder they’ve got. Puig must be protected, and the Mets will have to be served notice that if they throw at Yasiel, it will not be ignored.

How the Dodgers choose to deliver that message is of course, up to them. Whether the unwritten rules of baseball are fair or not, barbaric or not, they exist. Unfortunately, the Dodgers may have those rules thrown into their faces – literally.

Temperatures are rising all around Los Angeles. Yasiel Puig’s bat is on fire and the Mets are boiling over. The two teams will face each other one last time tonight. Everybody grab a fire suit, because this just might be a four-alarm affair.

6 thoughts on “Yasiel Puig is Heating Up, and He’s Attracting Heat. Look Out!”