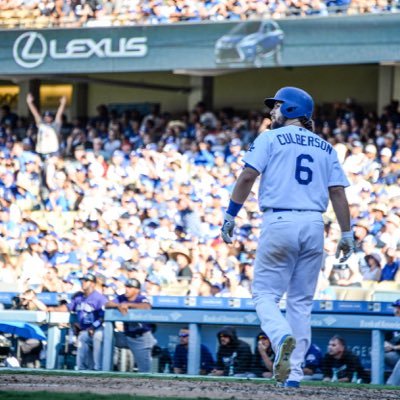 When the Dodgers acquired slick fielding infielder Charlie Culberson from the free agent pool last winter, we all laughed a little. The 27-year old former Rockie was entering his fourth MLB season. Culberson had garnered 23 plate appearances for the Giants in 2012 before spending the next two seasons with Colorado. He was just the type of player that Andrew Friedman and his sidekick Farhan Zaidi loved. Culberson was cheap, versatile, and cost controlled. He was Friedman’s biggest wet dream.

Culberson played well for the Dodgers in 2016 as he was shuffled on and off the roster and played all over the diamond. Culberson batted .299 (20 for 67) while playing in 34 games. He saw time at shortstop, second base, third base, and left field. The plucky utility player provided the Dodgers what was perhaps the biggest hit of the season on September 25th, against his former club. The game also happened to be Vin Scully’s final home game at Dodger Stadium in front of a sellout crowd.

The Dodgers had to rally to get there first, and that was a pretty awesome turn of events. With the boys in blue trailing 2-1, and later 3-2, they scored three runs in the final three frames that tied the score, sending the game to extra innings. Corey Seager’s RBI triple, and game-tying home run in the bottom of the ninth set the stage for Culberson’s division clinching blast.

It seemed as if Culberson’s shot, and the Dodger’s clinching their fourth consecutive NL west crown was a side story to Vin Scully’s final game at Dodger Stadium. Naturally it was an emotional finale at Chavez Ravine, and what turned out to be a perfect ending.

When the game went into the bottom of the tenth, we could all feel what was coming. We had no idea it would come from the most unlikely of players. With two outs in the tenth frame, Culberson swatted an 0-1 hanging slider over the low wall and into the seats in the left field corner, sending Dodger Stadium into pandemonium.

Not a bad way to end the home schedule. The Dodgers were going to clinch the division at some point. There was no way they could send Vin home with a loss in his last game at Dodger Stadium. Culberson assured the celebration would stay at home. This was the third best moment of the 2016 season.

What it All Boils Down to…